“People will often speak words, produce gestures and act on subconscious body language or expressions, only to subsequently display humour and denial to disguise the true intent.  It takes a foolish person to not know that they meant every ounce of what they did.”

Another one of my many interests belongs to the sport of tennis.  I’ve been a fan since being old enough to hold a racquet, so the last couple of weeks have had me glued to the Australian Open coverage.  Unlike other blogs, I have no inclination to get involved with the whole anti-feminist viewpoint.  I’ll leave all this to those who attain more passion on the subject.  But just to add my two pennies in relevance to tennis, why should women be paid as much as men to do 3/5s of the work?  If there was a female and male director of a corporate company carrying out the same level of responsibilities on salary parity, yet the man only decided to attend 3 days of the week, I wonder how the woman would react…

What the last 2 weeks has reinforced in my mind is the already acknowledged difference in how, in general terms, the male opponents act with one another at the post match net handshake in comparison to how the good ladies proceed.  When one of the great former players of the game in Martina Navratilova holds no hesitation to state that women should take a leaf out of men’s books when considering the end of match acknowledgements, you know there is an issue hanging around like a bad smell. 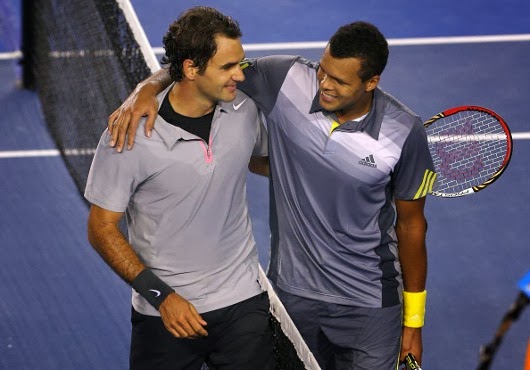 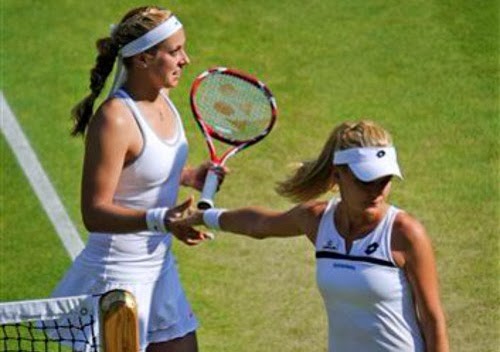 Now yes, the examples above are from polar dynamics.  Roger Federer and Jo-Wilfried Tsonga are off court mates, whilst Sabine Lisicki and Agi Radwanska have some obvious history.  My guess, with the girls, is that the conflict goes beyond tennis per se.  I’d like to know which male ball striker they have both nailed!  Given the choice, I’d take Sabine every time.  But the disparity in attitude between both sexes in the middle of the court, on a broad scale, is a world apart.

In the situation of friendships that coincide in our everyday lives, this is nothing more than most people will have at least had passing thoughts about.  Women are bitchier, and they find it harder to make friends, and stay friends.  On the other hand, men find it easier to make buddies and continue with unconditional alliance.  Nothing earth shattering here then.  But what I believe most men fail to comprehend is how someone can ascertain a good understanding of how a woman would be in a relationship in consideration to how she interacts with her female friends.

I published a post a couple of weeks ago (see link at bottom) in reference to the various relationship types of women.  In summary, the two extremes fall into those who constantly need boyfriend validation – hence they bounce from one relationship to the next with next to no pause – and women who are far more independent from required boyfriends, almost to the point where they will reject any man until “Mr Perfect” comes along.  In truth, both extremes are just as eager for love as each other, but one side needs the reassurance of being loved, even if only content in actual happiness levels, and the other side find enough strength to go it alone, even if basked in daily frustration.

These are the extremes, and my experience tells me around 10% of women are the typical boyfriend hoppers.  No more than 2% belong to the independent female group where they strive for perfection.  Simply put, there aren’t many women who can justify such an attitude.  This leaves the majority that sit somewhere in the middle, but a far greater percentage will stray to the left side of boyfriend requirement than the right side of independence.  Not to put too fine a point on things, women, sooner rather than later, have the itching feeling to show the world that they are loved.  She may not love the man she finds, but she sure wants external parties to know he loves her.

What you find with women is that their friendships are based more on convenience.  You only have to compare the number of women you know who have dated one of their “friend’s” ex-boyfriends, and then compare this with how many men you are aware of who have done likewise in the gender inverse scenario.  Admittedly, the men these women share are usually taken from a popular profile status, as hardly any woman is going to fight with her friend to capture a perennial unwanted nice guy.  This process of male mate poaching or post break-up tracking is not very common, because there are so few men worth fighting over.  But make no mistake about it, if there was a man they all desired then they would rip each other’s eyes out to get him.

Despite being more desperate, supplicated and sex hungry, men show more loyalty to each other when it comes to female competitiveness.  It’s almost like an unofficial agreement to not take damaged goods from one already burst by his buddy, and in rare cases when the opportunity is there, the usual circumstance is for him to ask before entering.  Nevertheless, this apparent loyalty can be clouded and perhaps overrated a little.  If you took a random group of 10 men under the age of 40 and a random group of 10 women below the age of 30, I would take a confident estimate that no more than 2 of the men strike all the women’s attention in a sexual way.  Flip the coin, and there’s a fair chance at least half of the women would be seen as shaggable to the men (most men, present company not included).  So basically, women are fighting with more friends to secure a small pot of wanted men.

I’m always cautious of dating women who claim they cannot get on with women or that most of their friends are men.  This goes against human nature.  When all said and done, I’ve barely met a woman in my life where I could honestly say I’ve enjoyed her conversation more than hanging with my male buddies.  The mitigation to spend time with women is naturally down to what they can offer me sexually.  The same should go for women.  It would take a bizarre woman to genuinely enjoy talking about topics from the male spectrum in contrast to what females gossip on with.  So when a woman does congregate with men in preference to women, you can only assume one thing.  She is jealous of sharing attention with other women, and she has a constant need to feel important.  Men being men, even if they have 0% chance of nailing her, will show her how valuable she is to planet earth.

The biggest warning to men dating these "homely girls" is along the lines of making sure you use your own methods of contraception.  Boyfriend orientated women have a strong need to feel wanted, and settling down is a high priority at the first sign of anyone who seems like a decent guy or makes her feel worthy.  She can, due to high insecurity and low confidence to explore the world of male specimen, believe a life with the man and a kid will have a fairy tale ending.  Fallacies can be formed in her mind that a man isn't just after a quick lay, and fatherhood will make him stay with her.  Needless to say, she will act first and surprise you later.  So if she does give you the daddy news within a few months of dating, and the sex is still your number one concern, you've been warned right here and now.

However, the plus side to women who cannot find it in them to socialize on a same sex grounding is that they are, usually, more loyal and forgiving relationship girls.  As they lean away from girl’s nights out, and they have very few female voices to confide in, they are less susceptible to the cunning and manipulating words of envious mouths.  So if a man makes a mistake (not that he should have to care about it if he did), there aren’t many knife twisters or shit stirrers in her immediate vicinity.  A man will get more leeway with relationship orientated women who don’t have an array of outside female influence.

This is totally opposite to the women who I have, by majority, been in relationships with.  “Girl’s girls – those with many female friends and partiality towards girl’s nights out – will seek advice on any given angle when it comes to their boyfriends.  Even when they don’t ask for it, these female friends just can’t resist a sneaky dig at her loved one.  This is all the more relevant when the woman has a high calibre male partner and her friends are single.  Of course, every woman only has her friend’s best intentions at heart, doesn’t she?  Heaven forbid me to accuse some of them in having their own agendas!

With regards to the positive aspect of “girl’s girls”, if you’re an independent guy then you can expect a good deal of space from her.  Even if she’s chomping at the bit to see you, her default experiences from all the uninspiring men in her life has caused her to never show any emotional cards.  This is where only astute men or care-free jerks can win these women over.  Eventually, with comprehension to the low number of quality men combined with time running out for her to capitalize on her peak value, she will show her heart due to the risk of losing the man she loves.  Clingy nice guys, as most men are, will be chewed up and spat out with women of this nature.

So friendships to women are more a case of forming a group to fight a war against others.  There are very few women who would stand in front of their allies in the trenches, happy to put their welfare at risk in knowledge that their companion lives on in happiness.  Women are just simply not designed to be this way.  Whether we face up to the truth or not, nearly every woman wakes up in the morning with thoughts of how she can be a step ahead of those competing with her.  If it means using some of them as stepping stones to success, or getting one over on them, then so be it.  If they’re all doing the same, no one is worse than the other.

Not dissimilar to how women become friendlier as they get older, you will notice how female friendships do become more genuine, solid and loyal with age.  If you ever do hold desires to see this, look at how your mothers and grandmothers act with their female friends.  Sure, this is a generation thing too, but I can guarantee you it will also be the case with modern day younger women when they reach their 50s, 60s, 70s or 80s.  Once there is less at stake, and attention, external validation requirement and hunting down men is a now dissolved motivation, it’s almost as if a weight is lifted off their shoulders that dragged them down for 30 years or so.  Was this burden all worth it in the end?