Detecting a woman’s attraction or otherwise

“When you allow yourself to hate the game, the game has won the battle against you.”

It appears to me that if you asked the random man on the street (and I would say this applies to >90% of men), he would have little idea or comprehension regarding a woman’s projected feelings onto another man based on her facial expression.  Some men may, on gut reaction, have a grasp of the good or bad and positive or negative of this female expression, and they may in fact­ be right more than they are wrong, but I believe so few men have an understanding when it derives to the emotional psychology behind what forces her face to express the way it does.

The problem with an all-size fits analysis of this observation is that a woman’s reception of a man in her close vicinity, or a man who approaches her, will be influenced by a few factors.  What kind of mood is she in at that particular time?  Is she feeling confident, attractive and sexy during those moments, or not?  Where does she there and then sit in her menstrual cycle?  Is she in the comfort of her other friends (female or male) at the time you are nearby, or is she alone?  Does she possess intelligence, personality, and an ability to hold a conversation with someone not in her friendship network, or is she, with respect, a bit dense in articulation terms?

Unsurprisingly to many readers I expect, I believe the heaviest weighted component dictating how a woman’s face will uncontrollably default is down to said man’s physical attractiveness in comparison to her.  Exceptions will exist, just like in any walk of life.  Occasionally a fat and ugly woman may be pleasant towards a very good-looking man, and an extremely attractive woman may be unpleasant in the face of an above average (but not great) looking man.  I use these two examples with knowledge of the two most common female reactions you will see – ugly women being acrimonious towards the best-looking men, and hot women being very friendly towards above average (but not very good-looking) men – therefore when the inverse applies in both scenarios, it is very much the exception rather than the norm.

Before we visit the images, it is critical to emphasize that all the explanations are based on exampled woman not knowing the man on a personal basis.  Sure, she may know and have seen him within an environment, but they have never spoken before.  Further still, it could be the first time she has seen him.  The reason this has to be stressed is because, irrespective of a man’s physical attractiveness level, or her own for that matter, a woman will nearly always be much more engaging and pleasurable when interacting with a man she knows, in contrast to a man she does not know.

Furthermore, the lion’s share of commentary for this post will be dedicated towards how the woman will express when around unknown men to her who sit at the top end of male physical looks (8/10 or higher) spectrum.  This is because the pictured woman as shown will by and large be approached by men who are near or of parity (and in tiny minority cases, men even above her) in physical attractiveness.  Nevertheless, and as this blog has illustrated and explained inundated times, men below her looks level (which will apply to >95% of men) should not rule out the possibility of her being open to his advances. 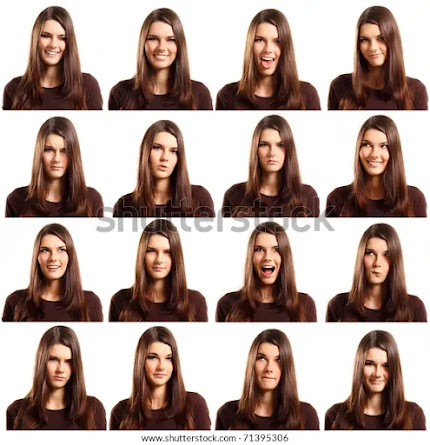 She is a very attractive young woman, I must say.  Judged on what we see (which will conceivably be photo enhanced and acknowledged that we cannot see her attributes from lower neck down), she is an 8.75/10 in physical looks grade in my view.

Top left photo is 1, with bottom right photo being 16.

No prizes for guessing, but she is happy in said man’s proximity and is quite keen for him to come and talk to her.  Her reception will be positive, friendly, and engaging.  This by no means guarantees that she holds hard ambitions to pursue with him, but she might have if he can show her there is more to his offerings than just his admirable face, body, and height.  With this kind of female facial expressions, it would be a wasted opportunity in not trying to move things on with her.

Perhaps not so optimistic as above, however during interaction these playful (and somewhat immature) expressions still give off decent signs that she enjoys your company.  My concern would be that she would express this way with any other man, no matter how mediocre he may be, and therefore it represents a “friends only” kind of portray.  These faces strike me as a woman being a bit of an attention seeker, with truly little action to back up her fun-loving exterior.

This is where a man needs to start using his experience and knowledge, as expressions of this nature can be construed wrongly if not on the savvy money.  Whilst these are generally amiable, it is now reaching the stage where her little mind is sending out internal warning signs.  She has started to question the kind of man you are, and that you are a player, womanizer, poor boyfriend material, or generally someone who is not what she has a natural desire to be for a male partner.  All is not lost, however at this stage you need to give her a bit of reassurance that you have been involved in long term relationships, and that commitment is more your thing than pump and dump.  It may well be, sadly, that she has made her mind up that she does not see a next stage with you.

This expression deserves a segment on its own, because this is the down the middle equilibrium when she is neither overly positive nor negative in her feelings projected onto you.  She is clearly sexually attracted to you, although simultaneous messages are arriving in telling her ego to fight against her heart and physical inclinations.  I’ve seen this kind of look more often than I can remember.  You may have just a few split seconds to try and get her away from resistance, and onto an emotion efficacious.

These two expressions may appear vastly different on face value alone, but her subconscious sentiment is effectively sending back the same communication to her brain.  Photo 14 expresses amalgamated attraction yet caution.  Photo 16 magnifies awkward attraction.  In the case of the former, I would hedge my bets that in the vast majority of instances she will now not go any further with you.  With reference to the latter, a face of this kind, to me, represents someone who just needs that bit of, in spite of being very sought-after herself, consoling that she is good enough for you, and she could still feel special when with you.

This photo is not dissimilar to photo 10 in terms of her warmth level onto you, even though to the naked eye it appears less favourable.  Like photo 10, she is here caught between a rock and a hard place regarding her liking of your presence.  She isn’t feeling hostile, but she is equally lacking in natural comfort.  Sexual attraction is there on her part, but it may well be that she harbours no genuine intentions to get to know you beyond an environmental conversation.

You have either farted with her standing a couple of yards away, or her nose is simply put out of joint by your near, equal, or even greater physical attractiveness in gender relative terms.  Although 7 and 13 are more aggressive in sight, photo 5 is not much better as it still portrays a woman who is not too keen to see you.  Other than convincing her that you are a multi-millionaire and of high status, there is next to no chance of you turning this round into a successful conclusion.  Even your dollars and profile may not be enough, such is her priority to be with a lesser looking man in need to feel better about herself due to his comparative ugliness.