“No man ever went broke by banging a profit.”

Whether we like it or not, we live in a world accustomed to busy weekend bars and clubs employing a weirdo who walks around in taking abundant pictures of our group gatherings.  Once Monday morning strikes, onto the website gallery do the folk gallop to see if they caught our “good” side.

Women, as the sex with more inclination, emphasis and necessity to exploit their visual existence, naturally take a greater concern to all this.  From my estimates and observations of the night scene galleries in my home city, there is merely a 1:50 chance of seeing a photo that shows a woman who strikes my attention, although it is relative to the particular venue to where the snaps were taken.  In truth, these women can pose in any such way they please without it having too much negative ramification, because as most men are so forgiving, clueless and desperate, if there is a half-decent face and body on show then her stupid expression will be taken as an oversight.  Even for clued up men like me, who can ascertain personality tell tale signs from a woman’s pose, I would still give her a clean slate if venturing on for good times developed.

On the other hand, men can throw it all away by portraying their image incorrectly.  As women are far more critical of men than men are of assessing women, the way a man holds his stance and demeanour can pretty much make or break how a woman will perceive him from that day on.  Remember, a woman’s perception will rule over any other fact, reason or piece of evidence.

The below photograph includes 5 men on a random night out.  From left to right as seen, they are labeled as guys 1 to 5.  They all look in their 20s (left side guy is probably in his 30s), and some get it right whilst others take the road that is so horribly off track: 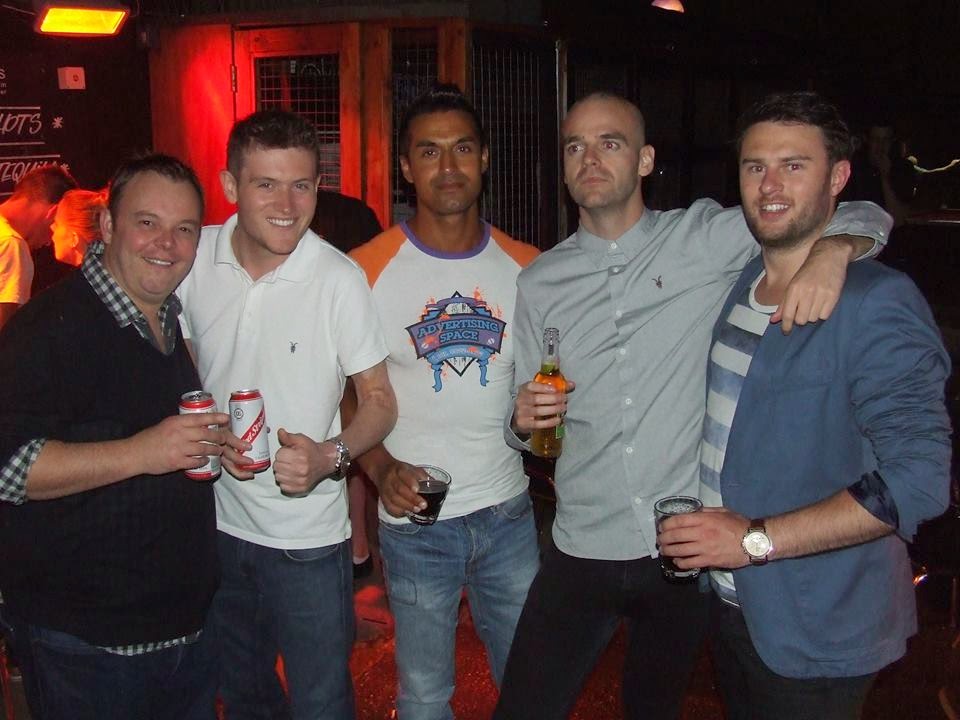 All in all, this man portrays his cuddly character, and this will endear him to the less sought after women out there.  With a few of stone diminished from his rounded frame, he could potentially notch his overall physical attractiveness grade up by half a mark or so.  Unfortunately, his lack of presence in this photo does him no favours to shoot above his league in female admiration.

As a short and overweight guy, the last thing he should be doing is raising his shoulders to show a level of nervousness.  He slips up by not relaxing in this way.  His can of beer is held too high, and the smile, whilst positive in terms of showing he is having a good time and displaying an illustration of someone you could have a good chat with, exceeds how higher calibre women would view him in a required sexual attraction manner.  However, on a plus note, his smile is not a picture that gives off too much exhilaration.

Whilst neither ugly nor good looking, a drop in the middle average looking man has the biggest bang for buck facility to impress women in a male group photograph.  This guy throws that apparent luxury down the toilet with his next piss.  Simply put, there is barely a positive thing to say about this pose.  If I stretched to kindness and optimism, at least the smile isn’t too goofy or as wide as a German autobahn.  That’s the only non-detrimental aspect to this ludicrous stance.

He replicates the silly “thumb up” sign that would be seen by one of the Inbetweeners cast.  Bad move.  He edges forward to look shorter than he is, his beer can is also held too high, and he basically looks too pleased to be there.  Women would have been indifferent at first sight.  After a closer look, he will be thrown into their garbage recollections with all the other thousands of uninspiring men.

As the stand out feature of the group (best looking, most stylish, joint tallest and in bodily shape), this guy actually has the most to lose and least to gain out of a website gallery photo.  As women already see an eye catching specimen, there is little he can do to enhance his image, but he sure can stuff it up if not on the money.  With “golden boys” who apparently have it all, nearly all women are waiting with baited breath for him to mess it up and give them reason to not date him and rule him out as boyfriend material.  Women like men who are not easy to capture, but they are equally at unease with men who come across as unattainable.  The balance is a fine one.

Unfortunately for the haters, this man holds an almost perfect attitude and posture.  Fair enough, I could nit-pick and say the glass is slightly tilted, but he does hold it at the corrective waist level.  He maximizes his height, and his shoulders, unlike guys 1 and 2, are completely relaxed.  But most beneficial of all, his facial expression is in the production of a mild smirk.  Nobody can accuse him of looking miserable, but he sure doesn’t look too thrilled to be there either.  Everything in this man shows a reflection of mystique, confidence, apathy, and a slight edge to his character.  He keeps a female onlooker intrigued and interested.

Although this pose is slightly more efficient than guy 2, the problem with staring into space is that it offers very little leverage for projected female attraction onto him.  By not looking into the camera lens, it can also be construed as self-consciousness and a lack of confidence.  Once women (women worth having) see a man lacking confidence, it is game over unless he has something else in enormous amounts to compensate.

Granted, this pose may not lose him many fans, but remember that as a man who is only average in overall physical attractiveness terms, he really needs to do something that strikes women’s eyes rather than offer nothing more than their passing glance.

If you look at his right leg, you will notice that this stance loses him about an inch in total height.  As an average looking guy with receding hair (although he takes the best option by shaving it), he should be optimizing his best asset - that is height.  The bottle is held too high once more, and I’m not a great supporter of placing an arm around a buddy.  That said, at least he holds the guy to his left in a manner where he is the more dominant, as opposed to a nancy grip around the waist.

This man proves how, if you must smile with teeth showing, then it’s not a bad compromise to proceed with.  I’m a firm advocator that men should only show their fangs on isolated photograph situations, and if you must feel the need to smile then do it very mildly (slightly more than guy 3, but not close to the level of guys 1 and 2).  Nevertheless, in the case of this man it isn’t too strong a glee to suggest weakness or discomfort, so a tick in the box can be given on this occasion.

He is facially a very decent looking man, and I would predict he comfortably sits in the top 3% of eye catching males on a random night out.  In truth, he is perfectly placed to attract most high end cute women and low end hot women, as he neither borders on the indifference they feel with run of the mill looking men, yet he likewise isn’t too daunting due to his average body.

Yes, his glass is held a few centimetres too high, but this negligible slip won’t live long in the memories of women.  He stands upright, and he doesn’t repay the arm hug to the other guy.  It would appear his mate is fonder to be in his company, and this elevates guy 5’s overall value to female spectators.

Q-tip:
Whether by accident or deliberation, notice how much more dominant guy 3 is in being positioned centre of the group.  Sure, he may just so happen to be the most physically blessed, but people’s visions are naturally inclined to look in the middle of an image, portrait, picture or scene.  If you can’t go centre, go to the far end.  As a similar analogy to being interviewed, you should always aim to be first or last on the list of candidates.  Human instinct is fundamentally born to recall what we love or hate.  The feeling of indifference towards someone or something is the mother of all obliviousness.  Women critique men harshly, and they forget men rapidly.  Don’t make it easy for them to deliver either move. 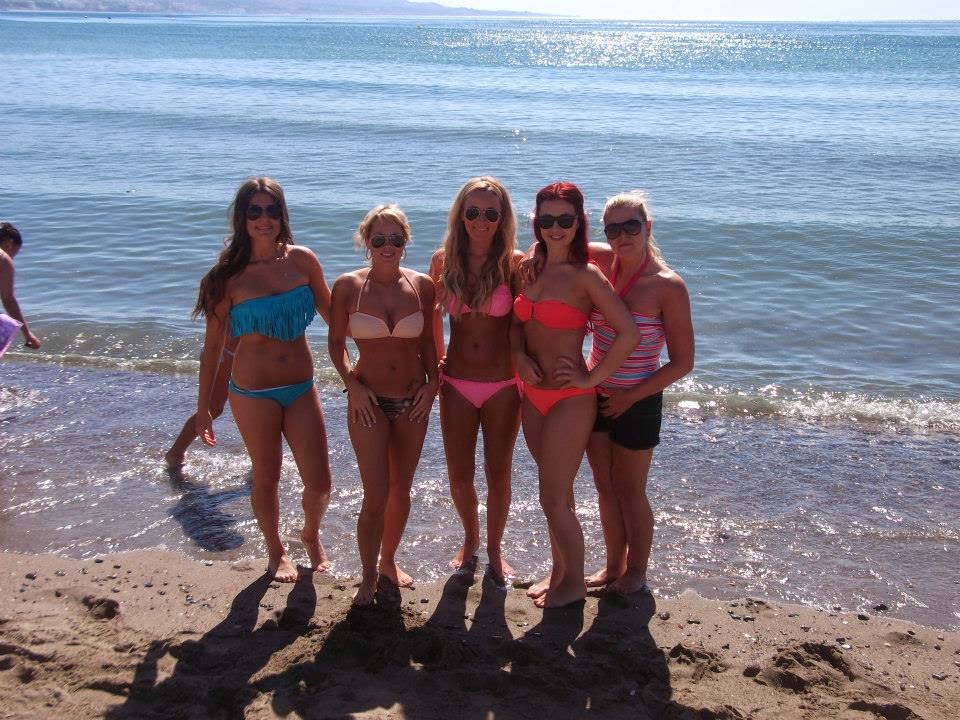 As a wrap to this post, it is important to understand how men and women view the opposite sex from a picture alone and with nothing else to go on.  Within the photograph of all 5 women above, I would expect the majority of men’s eyes to immediately project onto the woman in the centre.  I would also place big money on the same majority of men – of all male shapes and sizes – being most partial to date and sleep with this woman in preference above all the others.  Simply put, nearly all men would find her, and say she is, the most physically attractive.

Now go back to the group of men.  Nearly all women will find guy 3 as the most sexually attractive and arousing.  If placed upon a lie detector so their egos couldn’t stand in the way of the truth, this same proportion of women would verbally say so too.  However, only a small segment of this majority would choose to date, or even sleep, with him over the other men.

This would be a rough split to how women (aged between 18 and 45), if forced to choose one of the men, would select their long term partner if all else was equal:


What explains this gender differential you may ask, when only appearance is at people’s judgment disposal?  Pure and simple, men are visual creatures, and they pro-act with what their sexual predilections draw them towards.  On the other hand, women do not take comfort in men who are above their own looks scale, and they form reluctance to concede that a man is above them or he is unattainable.  To take it one step further, men run with physical organic feelings, whilst women chase with differing emotions.  If a woman attains low confidence, high insecurity, high self-consciousness, low trust thresholds and magnified egoism, these traits are mixed into a manifested melting pot to form ingredients that produce a recipe known as placing safer bets.
Posted by Vi Nay at 15:13