Beauty dumped by the beast

“Never believe someone who mentions the phrase of beauty being in the eye of the beholder.  They are people questioning the credibility and happiness of their choices.”

The recent high profile split of two former world number ones in their respective sports - Rory McIlroy and Caroline Wozniacki - may have raised a few eyebrows in the sporting world and afar.  It may well have risen further scratching of the head when it was revealed that the male golf star instigated and decided on jettisoning from his female tennis star fiancé.  McIlroy referenced how the writing of wedding invitations made him acknowledge that he wasn’t ready for this level of commitment.  Defining words from his statement included,
"The wedding invitations issued at the weekend made me realise that I wasn't ready for all that marriage entails.” 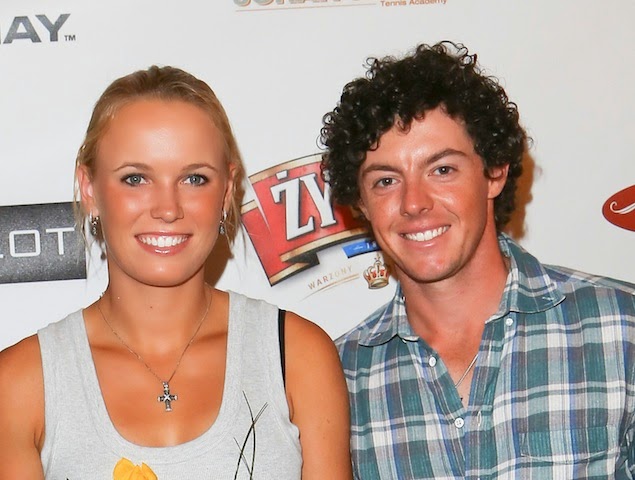 Some people, mainly women, will say how foolish McIlroy has been.  When they started dating in the summer of 2011, I very much think that men looking in would have been saying words along the lines of “how the hell has an ugly dude bagged her”, whilst women were more generous in the way of “don’t they make a cute couple?”  Ultimately, the male voice victimizes a woman for significantly “dating down”, whilst the female voice attempts to justify why they do what they do – hence picking out lesser looking men.
Whilst women do prefer to be with men less physically attractive then they are (typically a man who is 10% to 15% below her), it isn’t often by the 40% margin that can be seen with McIlroy and Wozniacki.  She is very cute bordering on lower end hotness, and although my strict rating places her at 7.75/10, I could be nudged a little to give an 8/10 overall physical attractiveness grade.  Rory, bless his millions in the bank, couldn’t ask for more than 5.75/10 in looks absolution.  Bear in mind that his 5ft 9 inches height stature stands him a full inch shorter than her.  When she wore high heels, it really was an amusing viewing when she towered over him.

Of course when a man is one of the wealthiest, talented and marketable figureheads in the whole sporting arena, physical looks allow an upgrade of this magnitude that almost dismisses any question marks.  In the world of fame and fortune, I bet you can think of inundated dynamics – beautiful woman with much uglier man – that spring to mind.  Add in the fact that women, even the highest profile women, do take subconscious and conscious avenues towards being with a man who is less physically attractive, and voila, here you have a production in the making of Rory and Caro.

That said, you will see a higher percentage of women in the celebrity world with men of similar looks level than you would in the “real world”.

Nevertheless, and with total comprehension that celebrity life is a poor example of what goes on in the sexual market for everyday folk, McIlroy does offer some good illustrations to how men in these situations can consider the path going forward.  Although I’m in little doubt that he thought he had won the lottery when he found her willing to date him, a period of 3 years (which is a small timeframe in the whole consideration of an indefinite relationship), has brought about a lack of appreciation on his part.

Wozniacki is encroaching her 24th birthday, and although she still looks mighty fine, take a look at her when she was 19 or 20.  Although in negligible amounts, I don’t think she is as eye catching now as she was then.  A woman who hasn’t birthed children should be reaching her beauty peak in the mid 20s, in hope she can preserve it for a few more years to come.  If a woman is less glamorous at 24 in comparison to 5 years younger, there isn’t much chance of her taking a U-turn and being more alluring come 30.

McIlroy, whilst being a relatively ugly guy (lower average at best), has the world at his feet.  He will have numerous women falling over him, many who are more attractive in an aesthetic way than Wozniacki, and the thoughts of settling down with just one woman at this stage of life leaves a bitter taste in the mouth.  All men can follow suit because of the similar following reasons:

Men of all kinds can learn from this magical evolvement in father time.  Although they may feel like they have hit the jackpot when locating a woman 20%, 30%, 40% or even 50% above their own relative physical attractiveness limitations, this leverage of upgrading reduces over time.  I’ve seen it numerous times in my existence with couples who met a similar age.  So although a man may be with a woman who is 30% more eye catching than him in relative terms during their early 20s, it is almost a given that 5 years down the line she will only be a maximum of 20% greater than him.  Move time on to when they are in their early 30s, and the difference will be no more than 10%.

Even ugly men become more “attractive” to women as they get older.  They may not become more sexually endearing to women per se, but as time goes by a man should increase his earnings, status, assets and personality appeal.  Throw in the fact that women do look for reliability, provision, dependability and husband material potential in future long term male mates, and it is no coincidence why women will always be seen with lesser looking, but perhaps willing in commitment, men.

Women want to “date down” in looks

To re-iterate, the vast majority of women take preference to being with a less physically attractive man.  This ensures their ego stays intact due to his comparative ugliness, but it is also a contingency measure for the female earlier and quicker physical looks decline.  So although a woman in her early 20s (but mainly mid 20s) sees her ideal man being only 10% less physically attractive than her, the reality is that providing she isn’t repulsed by a man, she will more often than not settle for someone who maybe doesn’t instinctively arouse her, but who will equally be reliable, loyal and faithful.  These decisions can come back to haunt a woman, but she will only abide by her present motivations.

Q-tip
Nearly all women are fully aware of the above 3 points, and they act accordingly to suit these undeniable occurrences.  Unfortunately for the vast majority of them (men), men are lacking in the understanding of this process.  What these two contrasting standpoints form is a world where women hold expectations beyond what they know is feasible within their true and objective value, yet men give in to all this because they only live in the moment.  If a man finds himself with a much better looking woman, his default mechanism is to think he has to stretch the boat to maintain her interest.  He is over gratifying in respect to a misconception that she has given him a chance to be part of her worth.  Not only does a man not need to exert beyond the call of duty – as time results in a woman being less admirable to the opposite sex and men being more alluring to the opposite sex – but he is also taking away her innate need for challenge in earning a man’s love.  When he makes it too easy, her gratefulness slides simultaneous to when her resentment spikes.

Only yesterday I saw the first woman I thought I fell in love with.  She is only a year younger than me.  In retrospect, I never loved her at all.  She manipulated, lied to and dumped me not just once, but twice.  She left me to be with a man who was not on a dissimilar looks level to Rory McIlroy.  At her best, she was a cute 7.5/10, and although I was not at the matured handsome level I sit today, I was still above her back then.  I remember crying in the arms of my mother after she departed the second time, as I asked how she could be this way after I gave her a second chance.

Although her figure was still in shape, her dress style stylish, her make-up unblemished and her nails as ever manicured, I had to sharpen my eyes to ensure it was actually her.  To me, she looked like an older looking woman who was maximizing what she possessed.  More than 10 years on and there were pronounced wrinkles along with lined skin, and a long way from the teenager I couldn’t bare a day without seeing.  I couldn’t quite see if the wedding ring was still worn (she married the referenced ugly guy 5 years after she started dating him), but without seeing him in recent years, I’d take a fair bet on the once 40% difference in looks between the two of them now being a third of this disparity today.

I know there are so many men out there boxing above their weights with women who are seen as far better looking.  Most of these men will be experiencing this luxury – in being with a woman more physically attractive – because roughly 80% of women are more sexually attractive in relative terms than 80% of men.  This is applicable on the basis of women being below the age of 40 (on the assumption the man isn’t 10+ years older than her), because it becomes a far more even split once this birth date is passed due to the physical evolution as explained.  Throw in the fact that women’s egos take them in the direction of lesser looking men anyway, and it manifests the everyday observation of women with uglier man dynamics.

So in truth, and in consideration to all of this, men can be accused of trying too hard and exerting too much in the early phase of relationships, yet they are the more likely person to stray away at a later stage.  This isn’t to say all of them will adulterate or leave, because too many obstacles sit in front of their withdrawal paths despite the consequence of becoming less interested in their female partners.

However, for women who think men may read a post like this and worry that they will no longer be taken for fools, even for men who are with much better looking women, I wouldn’t be too concerned.  First of all, most men are not too observant of what may be in the future, and they become so infatuated by fresher female beauty that they stand tall, free and supplicated, with an open cheque book for you to take him for a sucker throughout those courting years.

But in the main, modern day marriage causes a man - who is less interested to continue with a failed relationship once his interest fragments – to not have the easy passage to move on without a care to the ramifications.  When it is a simple matter of boyfriend and girlfriend bond, a man can (even though hardly any do) move on to something else once his female better half is causing a life that offers no benefit to him.  Women feed off this positively, because although denying this reality until the cows come home, they respect men who stick up to them and who are not afraid to lose them.  But marriage surrenders much of this power, especially when there is an imbalance in financial contributions to what a man will lose once the courts and lawyers have bled him dry.  It’s strange how women say they want marriage more than anything else, yet then they love and respect men less once they get there.

http://www.independent.ie/woman/celeb-news/a-very-modern-breakup-caroline-wozniackis-social-media-message-to-rory-after-split-30329073.html
Posted by Vi Nay at 17:18