“Tomorrow belongs to those who can hear it coming.”
(David Bowie)

When you see this below picture, what do you think? 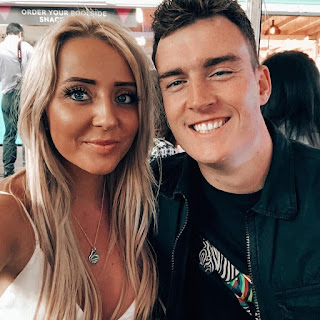 The obvious answer, a topic that perhaps can be seen as somewhat dominated by this blog, is a considerably more physically attractive woman than her respective male partner.  She’s an 8.25/10, and he’s a 6.5/10.  Whilst this >25% gap between the two is larger than what is usually seen (most women go for men who are 10% to 15% lesser looking), it’s by no means a fall off your seat moment for people who observe in the real world.  You will see many women of >8/10 with 6.5/10 men in the physical looks department.

Of course the common phrase used to sum up these relationship comparisons is: "He's boxing (punching) above his weight."  This has become an almost enjoyable phrase to use by most people - distributors and recipients of the comment alike.  The female recipient likes to hear this because it enlarges her head and basically spells out that he needs to be grateful to be blessed with her all so valuable presence and existence.  The male side also emotes fondly to the words, because this is symbolic (at least this is what he naively thinks) that his non-visual attributes are what scores him a better looking girlfriend.

The problem is, this phrase is born out of artificial happiness which can, and usually does, have detrimental implications further down the line.  A woman dating a lesser looking man is by and large a case of making herself feel better about life, whilst the man is very rarely aware of this being the main motive on her part.  Don't get me wrong, this none organic way to get together can work if a man is aware of the circumstance and plays his strategy in accordance - flipping the script in convincing her she is the one who should be grateful to be with him - but only a tiny percentage of men are that clued up.

A few years ago, long back when you could visit another country without contemplating quarantine procedures to enforce you not to go in the first place, I sat by the poolside during a vacation in northern Italy.  I was minding my own business, eyes shut and high into the sky, when a couple sat nearby and started talking in German (or a dialect of the German language).  I speak and understand reasonable German, but most certainly not to the level of comprehending what they were saying.  It mattered little anyway.

For my curiosity and interest in heterosexual couple dynamics, I discretely looked to my left hand side (for clarity, they are not the couple in the photograph!).  What immediately stood out to me, and if the truth be told moved me negatively, was how darker skinned she was than him.  They were both of Caucasian ethnicity, yet she was as tanned as a white woman I’ve ever seen and with dark hair, and he was as pale as could be with ginger/auburn locks.  It just looked weird.

The usual course of events

Putting sexual inclinations and satisfying their hearts as a priority to one side for now (and let’s be fair, most modern day women put their egos and motives to feel better about life ahead of both the aforementioned), this is what women ideally desire in a man as their male partner.  The list is not exhaustive:

Based on the fact which both science and real-life observation proves, when a man and a woman are of the same ethnicity, the male face and body is of darker complexion than the female equivalent.  With this base skin colour laid as the foundation, the man will tan quicker and go darker than the woman further still with spells in the sunshine of parity.

So when you see images as illustrated in the above image and as explained on the Genoese poolside, you end up scratching your head even more than usual.  Personally, I find it a strange, weak and even repulsive viewing when a woman is significantly more tanned than her boyfriend.  It just doesn’t sit right.

I’d even say that an Indian or African origin (to mention only two darker skinned ethnicity groups) woman alongside a white man gives off a much better dynamic.  With this, you are born with what you are.  Maybe the white man has a thing for women of this race, and vice versa.  They will also be churning out a cute mixed-race kid too, or at least with a higher probability if you go by the law of average.

But a white woman far darker than a white man?  No, I’m not having that without deeper analysis.

The obvious reason is a compounded female ego that stretches beyond even the norm.  Not only does she want to be more eye catching than him in visual terms, but she also holds a greater motivation to push this gap even further apart with a better tan.

What's even more bewildering is if women listened to men, they would actually know that there is sweet spot for how attractive men assess women's tans.  A bit like makeup/ and foundation, a little to medium amount makes her look more attractive, yet beyond that and it is counter-productive.

But not many women (outside of very savvy women) give a shit to what men desire, as long as they are out-doing their female peers.  Long live the female ego, and it isn’t going anywhere south in your surroundings any time soon.  If anything, it is only venturing in one direction.  That direction is not one I’m looking forward to.

I recall meeting a German woman on a beach in Athens (Piraeus to be precise) a few years ago.  We hit it off for a day or two, but we never stayed in touch.  She was cute (not hot), with a nice curvy figure, long dark brown hair, 5ft 3” tall, and white skin with just an obvious but not over-emphasized end of summer tan.

As we got the train back to the city, she leaned against my shoulder and commented on a blonde-haired guy a few metres away.  He had that surfer look, tall, not bad looking at all to be fair, and he was also German.  She whispered to me that she just didn’t find blonde haired men attractive at all.  Her words seemed genuine.  I replied in a light-hearted way along the lines of life just not being fair – stating that from my experience most blonde-haired women want darker haired men, and yet dark-haired women also prefer a man of darker shade.

And I can’t think of too many cases over the last few years where I have seen a woman with a lighter haired man.  As a percentage, it has to be very low.  Once more, if you do see it there is a strong chance the woman is self-attention and ego driven, although not in the same manner as a woman wanting to be darker skinned than her male partner - when both are of ethnicity equivalence.

Q-tip:
Notice what else is a negative dynamic in the photograph.  He looks way, way happier to be there than her.  This is the exact opposite image a man should look for.  She should be the one smiling like a Cheshire Cat – even if in disingenuous manner and just for the cameras – and he should be the one sporting a mild to indifferent smirk expression.  You may think, and women will tell you, that women love to see their man express happiness in being around her.  But a woman will always try harder for a man when she questions his happiness, and she will try less to please a man when she has him in the palm of her hand.