The unfortunate modern day we live in


I haven’t found where this actual chart originates or links from.  I located it when searching down my LinkedIn profile feed.  It may be somewhat exaggerated or even made up, and if so in the case of the latter, the validity in objective form does not carry much weight.  It is only fair to point out this possibility, as after all WCMD has always been based on as much objective nature as possible, in addition to what you see with your own two eyes.


What you see with your own two eyes is arguably more important and valid than any science related graph, chart, report or other source you may find on heterosexual relationship psychology, as much of the outcomes and conclusions are based on human answers.  Whether in anonymous conditions or not, many people (mainly women) will be economical with the truth regarding their real feelings towards the topic – due to protecting their pride, coming across as more genuine and moral than they are, and sometimes not even truly knowing how they act out in real life situations – therefore the statistics shown are only as useful as the truth in people’s language.


The counter-argument to the above is that you are only one person in the world.  The cynic to my view could say that even if you are honestly and accurately seeing one trend, this may not be the way things materialize in general terms and how other people see other happenings.  Fair argument.  I argue back that I don’t just look at scenarios that exist or happen/happened in my own life, and I stretch this observation to inundated interactions between men and women - often those I don’t even know on any kind of level at all.


Only you can choose which avenue to take in bringing about a happier and more productive life for yourself, but one point I would make without a moment of hesitation is that, no matter which option you run with, you must lay your chips on that colour and be decisive.  Sometimes it may be a combination of both, with science serving as support or reinforcement to what you already have seen or know.


For the purpose of this post, let’s assume the below chart is from actual findings.  Again, if you have lived a day in a life you will most likely by the end of reading believe this is how life plans out in the real world. 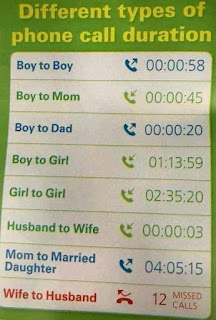 Boy to Boy
This could also apply with Man to Man.  The male population, by and large, are not comfortable talking for long periods on the phone.  They like to get to the point, generally to arrange a meeting point, and then cut loose.  No drama required.


Boy to Mom
I expected this to be longer than Boy to Boy.  In fairness though a boy only needs to ring his mother to pick him up or for a quick bit of advice (based on a high percentage of single parent families that now exist in comparison to previous generations).


Boy to Dad
Boy:      “Pick us up please Dad.”
Dad:      “Where are you?”
Boy:      “At the match with my mates. I’ll walk into town and wait at the fish and chip shop.”
Dad:      “See you in twenty minutes.”
Depending on the age of the boy, Dad may suggest stopping off for a burger or the son may suggest taking the old man for a beer.  Either way, they will feel no need for a long telephone conversation, but in the hope of a good son/father relationship, they will have a decent chat in person later.


Boy to Girl
Don’t get too confused in the hour plus length of this conversation.  The innocent and instinctive bystander may interpret this as the boy doing most of the talking as he was the one that rang her.  The more likely reasons are:

Girl to Girl
Drama, drama, drama, drama….  So busy, busy, busy, busy….  “Everybody is sooooo interested in me and my life.”  “There is no world outside of mine.” (“What do you mean there are another 7 billion people in the world!?”).  Two and a half hours later – “Ring me later babe.” (so they can repeat the same conversation from earlier).


Husband to Wife
Appeasing husband rings.  Wife (who is now fed up with him a year after wedding has been fulfilled) has nothing to say to him unless it is to moan.
Although clearly this duration has been manipulated for amusement more than any other dynamic, the seriousness of this example cannot be ignored.  When women (or girls) are in a non-marital relationship, irrespective to whether their male partner hits her buttons or not, she will put far more effort into their time together.  Once married, the motivation and self-reward to be charming, aimable, endearing and endeavouring has been severely diminished.


Mom to Married Daughter
This is probably the most concerning bond that has changed the greatest in the last generation.  Mom rings daughter as daughter is the princess of the family to who the world must accommodate.  Daughter does the majority of taking, pretty much repeating what she spoke about to her friend in the 02:35:20 conversation.  The biggest change to modern day society though is modern day mothers – especially those still in their 30s or early 40s when daughter is in her later teens to mid-twenties.  It was once that mothers, in relativity to today, were the responsible, educating, drama free and non-attention seeking parental figures who were there to guide their children through the muddy waters and precarious fields of life.  Now, with social media largely to blame, today’s mother is only a slightly mature version of her 18-year-old self.


Wife to Husband
He knows she is only ringing to either moan or ask for something.  More sly husbands will ignore the call while they are on the job to another woman, although this compartment of men (adulterating men), contrary to female belief, is a very low percentage.


Q-Tip 1:
Notice that apart from ringing her own friend, a girl never rings anyone else.  Self-entitlement and a thought-process that the world should come to her springs to mind.


Q-Tip 2:
All this gives further ammunition that, by clear majority and in the general scheme of things, young girls and women up to the age of 30 have the most power and options in the sexual market.  Men out of marriage start to catch up towards the late 20’s.  Men who choose marriage surrender much of this power due to the consequences a failed marriage brings to the table.  Women’s options take a large cut from 30 onwards, although marriage can give them security with the one man they marry.


I took a walk into Derby City Centre on Christmas Eve to buy a last few bits.  On the outskirts of town are a set of pedestrian traffic lights.  As they stalled on red, I noticed a cute long-haired brunette standing the opposite side with a baby in pushchair and young lad aged around 5 years.  The woman looked about 27.  Bearing in mind the pushchair could roll down, and the son could at any time just have a moment of madness to run across before permitted, you would like to think that her number one concern was ensuring neither moved even a centimeter forward.  Her number one concern was tapping away on her mobile phone.