How men should and should not express when alongside women

“If you have nothing appropriate or pertinent to say, it is better to say nothing at all rather than to say something stupid, irrelevant or that would be repeated.”

It never ceazes to amuse me how many men act so horribly wrong when in the vicinity of women.  Nothing illustrates these wrong moves more than when I see a photograph of a heterosexual couple.  A man may well think he is acting out the corrective procedures in illustrating all happiness, glee, optimism and gratitude in the presence of his loved one, and he may be fooled by the words that come out her mouth to leverage her ego, but if you are one of these men, how many times have you been ditched by one of these externally joyful looking girls?

To be fair, the images I am about to show correlate with the whole male character population.  That is: 80% (at least) of men border too far to the nice guy beta male extreme, 15% (at most) of men sway towards the care-free jerk persona, and as an absolute glass half full maximum, 5% of men (good guys) find the compromise by holding a balance between the two diverse scales. 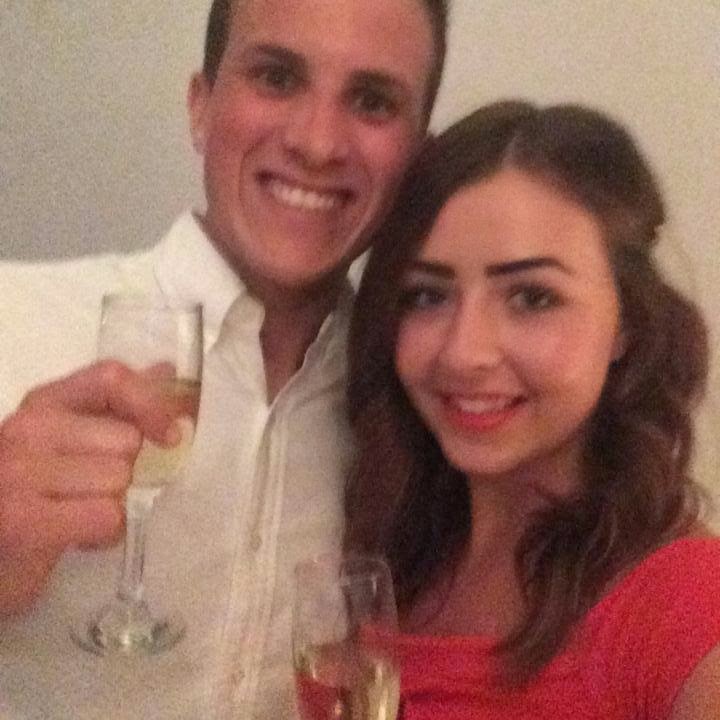 What good is there to say about this man’s expression?  If I was to stretch my realms of kindness, I may say that his decent teeth allow him to exploit one element that places him in a top 10% bracket.  Bear in mind though that most men outside of California do not have great teeth.  But let’s evaluate all that drowns him in the stormy sea:


You get the picture.  An average looking young man with a cute fresh woman is always going to be a sitting duck waiting to be dumped once her good feeling ego has reached its limits and there is nothing his over expenditures can compensate for any longer.  A man in this dynamic has to challenge a woman, and there is no better cost-free method to incorporate than keeping her guessing in relation to his emotions.  This man pisses that luxury down the toilet in just one photo.  All he succeeds in doing is further reinforcing her knowledge that he can do no better.  Great for her short term ego, but incredibly damaging to her longer term visceral feelings.

Q-Tip 1:
Women may think, and some may even say, that they crave to be with a man who worships the ground they walk on.  Remember that for every woman who does genuinely and honestly mean these words and who feeds off positively in loving a man acting this way, there are umpteen women who will end up resenting their man for taking the challenge away from her.   Deep down, she wanted nothing more than to fight for his reluctant selectivity in making her the chosen one. 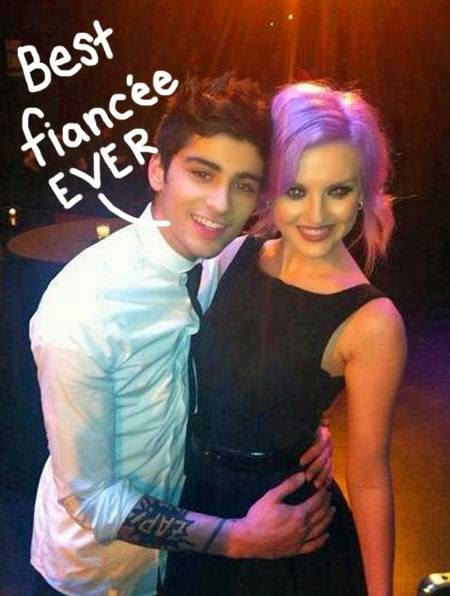 I’ve shown this photograph, because I know there will be some nice guys out there – who just cannot bring themselves to believe the advice as given in blogs of this genre – who would look to a vision of this kind and claim that exploitation of male public love, appreciation and compliments can lock down a woman.

Yes it can, but it is contextual.  A decent looking man with an average looking woman could act this way and get away with it.  She would be grateful to be with him.  Similarly, an older single mother would give leeway to a man exploiting enamoured habits as she would know her options are far limited in comparison to her hotter, younger and pre motherhood self.

However, far more important than any of the aforementioned reasons is the mere fact that the man above is Zayn Malik of One Direction – a member of the biggest (biggest as in sales, revenues, exposure) international music offering in the modern era.  A man in this position could carry his disposition in any which way he pleases with 99.99% of women, and it wouldn’t have a negative ramification on his emotional endeavours.  On a smaller but still valid scale, he is also as physically attractive as his girlfriend, and although she is the lead act of a British pop girl group, her status is not even on a level to tie his shoelaces.  With this in mind, a pitiful male gripping pose as seen somewhat mitigates the female psychological distaste.

Nevertheless, let me throw a hypothesis amongst the low possibility.  If she somehow became a little closer to another high profile star of similar looks and status level, yet this particular male candidate was always that bit more apathetic, ungratifying, non-supplicated and moody, which way would she then sway?

In contrast to the vast numbers of men carrying out wrong conducted mannerisms when with their female partners, there are a tiny minority of men in percentage terms who can get it just about correct.  With this guy, he holds it down to near perfection. 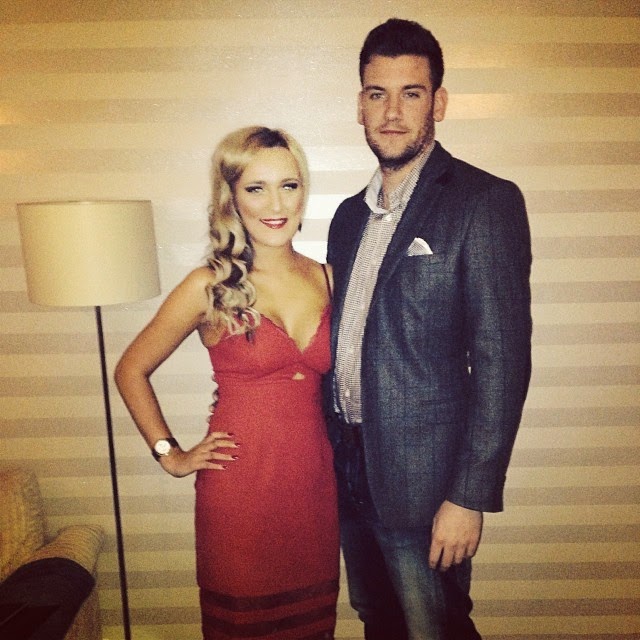 The only nit-pick I could arrive to within this all so uncommon viewing is that for even further emphasizing of her admiration projected onto him, she would have placed her right hand along his side abdominal area (although I doubt he possesses any visual abs).  That would have completed the set, as it is the proven female infatuation born out of defenceless physical desire.  My hunch tells me that in conjunction with unconditional positive emotion, there is still that conscious uncontrollable female thought of how she looks once the button is pressed.  A woman who places stronger emphasis on her inner senses than her outer display is a woman from the rarest breed.  I’m not at all convinced this is the case with her.

As the bottom picture just so happens to be conveniently there to see, I couldn’t not write a few words about the typical female selection criteria of an “ideal” looking man.  What you see here is the perfect male match up for a woman when considering how he will look up against her when public eyes are on.

Although women in this bracket will deny it, a woman like this will collide with a small but pronounced number of men who catch her eye and sexually arouse her more than the man she is with.  She is a solid low end hot girl of 8.25/10, and remember this look is as good as it gets in terms of the whole week.  In other words, she naturally isn’t going to look as endearing when the birds start singing.  This is another consideration a woman will make once the eyes open in the morning and she sees her man looking pretty much the same as he ever does.  But when all is said and done, she is a top 1% woman in respect to hotness.

He is facially decent looking, but he isn’t someone who will live in the memory of passing female recollections.  It looks to me like he is 6ft 3”, and although I have previously documented that 6ft 2” is the perfect male height, this is negligible in consideration to her comparison.  I’d say he has an above average body – in reasonable trim, but with a little bit of extra wobbly layers that could be conditioned if it mattered that much to him.  All in all, I’m thinking an overall physical attractiveness of 7.5/10 rating for him is perhaps stingy, yet 7.75/10 may be too generous.  Either way, he is at the upper range of above average in overall male looks.

And this is just the way a hot girl between 8/10 to 8.5/10 likes it.  Decent looking, good height, an attractive but not flawless body, and ultimately a man who is not going to steal the show from her.  This woman looks in her mid to late 20s, and her age would back up the unproven theory that the lion’s share of top end cute women and low end hot women above the age of 24 prefer to be alongside a man who is that undeniable margin below them in the looks stakes.  He receives enough compliments from the opposite sex for her to know he is a good catch, but he isn’t attaining woman after woman eyeing up his exclusive blessings.  You won’t see many women like her with guys of 8/10 or above.

But this post must finish how it is represented in the heading.  Irrespective to your looks level, the most appropriate default for a man should be a mild smirk bordering on a “couldn’t give a crap” expression.  If you are less eye catching in aesthetic terms than your respective female partner, this is the absolute minimum you start with.  If anything, border on the side of grumpiness.  With men who are boxing on a similar weight, or those who find their way to a less physically attractive woman (than your own grade), you may be prudent to throw in the occasional (1:10 ratio) smile.  In any case, I would always expect her to be smiling more than you if the relationship means anything to her.

Q-tip 2:
What is more important to you?  Is it to be liked by women and to make them feel better about life, or is it to be liked by women in a sexual manner?  Rarely can you have both when choosing one route.  If the former costs you time, effort, energy and money way beyond the latter, yet the latter, at worse, gets you to the same crossing point within the same duration, which road would you now take?

**** The descriptions documented with regards to habits, decisions, strategies or any other reference are based on my general experiences with females and males who are representative to the respective vision in each photograph.  This blog does not subscribe to claim these are the ways each woman and man mentioned above does, in practice, behave. ****
Posted by Vi Nay at 12:53