A movie with an inevitable ending

There are certain situations in life that bring about an inevitable outcome.  One scenario could be a person’s disgusted face when a neighbour’s cat craps all over your garden.  Another instance could be your inner desire to vomit when inflicted to the smell of piss when walking down the stairs of a multi-storey car park.  Or perhaps it’s the sight of a full English breakfast the morning after a big night?

In any case, life experience, assisted with possessing a few brain cells and not fearing reality, allows you to expect, if not be surprised, when a circumstance evolves from an apparent happy beginning.  Sometimes it is a simple case of just opening your eyes and not living in a world of fallacy and ideology.  Other times people open the wrapping paper for you, in confirming what you already knew.

This article gives a reader a real-life synopsis of what can happen when a woman dates a man who is significantly boxing above his weight in physical attractiveness terms.  As secondary onlookers (hence not knowing the people involved personally), we can only fill in the blanks of what else went on, and what goes on, within our best estimate outside of a one-page summary.

First, not for a moment am I doubting the woman’s integrity and honesty, nor am I defending this pathetic man.  He’s been jailed for 11 years; therefore he clearly took it up upon himself to use violent abuse on her amongst anything else.  Beating up a woman, in my opinion, is the most despicable and cowardice act (outside of murder and rape) alongside paedophilia.  I don’t care how much a woman provokes you or cheats on you, a man who chooses to use physical aggression on a woman is a complete coward and poor excuse for a human being with testicles.  Yes, woman do provoke and cheat, but a man who is ever is confronted with these moments must take the high road, move on, and be the bigger person.  If a man can’t accept that a woman never grows up, then there’s little benefit in getting seriously involved with her in the first place.

Here’s the once happy couple: 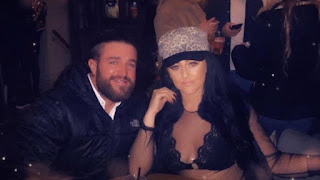 The above picture doesn’t do her much justice in terms of her hotness.  This one does: 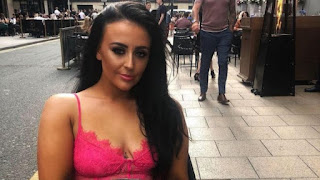 Albeit in a WAG way, and in the absence of seeing her whole figure, she is a solid 8.5/10 at the appealing age of 24.  Granted, from my experience women who doll themselves up to this level take a huge dip in natural look (it may well be if you saw her in the morning she is no greater than a 6/10), but as I’ve always said, you can only judge a person’s aesthetic value on what you see there and then.

On the other hand, he is struggling to even tip to 6.25/10 in gender relative terms.  That’s a near 40% leverage (or deleverage in her case) of partner physical attractiveness disparity.  A woman generally seeks out a man who is 10% to 15% less physically attractive than her, and it certainly isn’t alien to see women with men who are 20% less aesthetically gifted, but a 40% drop is rare outside of a man possessing fame and fortune.

The article does tell us she is a mother of one, and this one fact alone will deter many men, but her hotness level and relative youth mitigates a lot of her parentage baggage.

We don’t know the facts, but this is my take on the process of events from a general analysis when I see couples of this dynamic.

1)    A woman (especially above 23 years of age) has an ego driven motivation to be with a man less physically attractive than her.  The bigger the gap, the better she feels about herself and believes he will strive harder to please her.
2)    A single parent mother, no matter what her looks level, will have fewer male suitors than her equivalent non parenting status – all else equal.  This knowingly (although not admitting it to others or herself) makes her demands for a “suitable man” that little bit more flexible.
3)    A man in this dynamic, especially in a small town, will feel he has won the lottery in locating a woman of this hotness level to date him.
4)    At first, all is rosy in the garden.  The woman has her head (hence ego) swelled to a size that can barely fit through the door, and the man benefits from the best sex (or at least the best ejaculations) he has ever experienced in his whole life.
5)    As time goes on, resentment on her side strikes first.  Although appreciative of his efforts in the short term, she can’t help but think as each day passes that he is not the best man she could be with.  The smiles on her face dry up, and the good feeling she gained from being with a much lesser looking man diminishes.
6)    As time goes on, but later than the time as explained in 5), he senses her interest dwindling.  Sex is not as frequent, and her gratitude is not as common.
7)    As time goes further on, his sense of her growing apathy and disinterest manifests to produce enhanced jealousy and frustration on his part.  The existence of a kid (I can only assume the child is from another man’s seed), will only further compound his anxiety that he is not a priority in her life.
8)    She wants out - but will likely wait until there is a near guarantee of another man to give her boyfriend validation.
9)    He senses she is cheating, and his obsession of her and inner thoughts that he will never secure anyone as sexually attractive again, takes control of his mind to violently abuse her.

I want to reiterate once more that, no matter what happened (and I’d hedge a fair bet I’m not too far off the mark at all), any man who uses violence on a woman should have the book thrown at him and then have the key tossed away.  You could carve a better man out of a carrot.  I doubt she cheated anyway, but even if she did, any man in this position should just walk away and realize she did him a favour.

Q-tip:
If a woman ever cheats on you outside of marriage, comprehend that she actually did you a big favour.  This may seem illogical and bizarre when your heart is shaking like a volcano and the nausea feeling won’t leave, but ultimately she has given you a crash course in finding out what she is really like.  You could have spent months, if not years more of your life, before finding her true colours for the woman she truly is.

For the record, I have never knowingly been the victim of infidelity, but I can’t say in practice this was the case for sure. What I do know is that I have been with more than a few women who were looking for, and contriving a strategy for, their next boyfriend whilst still with me.

The article states that the man confessed to cheating on the woman on the same night as the torture started.  This is the part that doesn’t add up to me.  If a man has been cheating on a woman for a sustained period, I very much doubt that once confronted by his girlfriend regarding this adultery, he flips his lid and starts beating her up.  Surely, he just uses this as an excuse to get out (assuming why he was cheating in the first place?) or he asks for forgiveness in a way of holding his hands up?  I fully appreciate that a man can have sex with a mistress (even for a decent timeframe), yet still be in love with his girlfriend/wife, but I find it hard to understand how a cheating man then beats her up.  I’ve known first-hand of men to beat up their female partners once knowledgeable of her infidelity, but becoming violent when he is the one with pants caught down just doesn’t tally up.

My two pennies worth derive to these four possibilities:
·       He was never cheating, and this part of the story is make-believe.
·       She was cheating, and he found out.
·       He maybe cheated on isolated occasions as the sex frequency with her fragmented.
·       Neither was cheating, but his obsession towards her simultaneous to his sense of her drifting away took charge of his mind.