The not so body beautiful women go for

As a huge boxing fan, and secondary to this week’s launch of crappy Love Island UK, it came across to me as a worthwhile reminder of the male body women actually go for and choose in a long-term partner.  It is imperative, for any valid analyzation, to distinguish between what women desire in longevity aspects in comparison to what they are sexually turned on by.


On Saturday night, the professional sport of boxing brought about a mind-blowing surprise that resulted in Mexico’s (Mexican/American) Andy Ruiz Jr beating Britain’s Anthony Joshua.  Ruiz consequently, for now at least, became the unified heavyweight champion of the world.  Joshua was more than just a heavyweight champion.  Although not too well-known in America, he had become the highest profile sports star in the United Kingdom, and his wealth and fame illustrates this undeniable consequence.


What made people scratch their heads even more was down to the polar opposite physical aesthetics and stature of both men.  Even if you do not follow boxing, your eyes cannot hide from the below image. 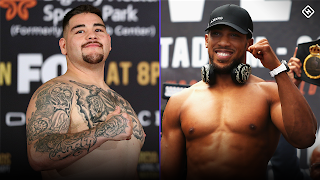 At the risk of technical explanation, Ruiz in fact could, and probably did, attain better cardiovascular endurance than Joshua on fight night.  Ruiz also has a far more advanced amateur pedigree than Joshua prior to turning professional, and this manifests in a “boxing muscle brain memory” that allows greater decisions to be made when hurt.  In essence, a body beautiful isn’t always the most effective and productive profile to produce in heavyweight boxing.  Ruiz was most likely better prepared fighter for a boxing match.  He just looks like Grimace from McDonalds' because he eats a lot.


Nevertheless, what intrigued me the most about the two extreme sides of physical stature belonging to both men was how the general public looked upon both fighters in the lead up to the big event.  Which body do you think the average men on the street would aspire to have, and which one did they perhaps somewhat laugh at?  Needless to say - Joshua and Ruiz respectively.  In respect to women (who would know not the first thing about boxing) looking on, which man were they salivating over when the top was off, and which one were they repulsed by?  Again, it would obviously be Joshua in the former, and Ruiz in the latter.

As a reminder to the purpose, this previously published post will give more than enough real-life evidence to explain the differences in how women are emotionally moved by a man’s body.  All else equal, most women would rather have sex with a man possessing Joshua’s physique, yet become the long-term partner to a man attaining Ruiz’s figure.  You will find a lot of women claiming that they would choose Joshua when in fact they would opt for Ruiz, mainly to hold down their integrity and score troll points in front of their friends.  As always though, watch what women do rather than listen to what they say.


But Joshua would have more women after him than Ruiz?


Absolutely he would, but this is only because he is famous and rich.  As I’ve documented on more than a couple of occasions within this blog, male high status and wealth – and the status whoring and easier life as a by-product they bring to a woman’s life - will reluctantly enforce her mind to erase the thought of being with a top end physically attractive man.


Q-tip:
If there’s enough of an incentive to improve her life, a woman will move away from her distastes.  This applies to reluctant venturing on with men who belong to both the grotesque and physically blessed extremes of the male population.